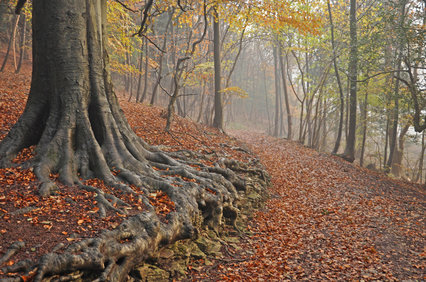 Trees make a highly significant contribution to the landscape, with woodland covering a third of the AONB.

Large wooded areas have developed over both the limestone hills and the more neutral and acidic soils of the valleys in between, while numerous field trees and small copses add height to the landscape of the open grasslands and pastures. While a considerable range of different tree and shrub species can be found in the AONB’s woods, by far the most ubiquitous is the Ash tree. With its open pinnate leaves, typically amongst the later species to unfurl, Ash allows plenty of light through its canopy to enable often spectacular displays of woodland herbs in the spring. Also of note are the many evergreen Yew trees, often forming large stands with dark, dense canopies over moss-covered limestone pavement.

The woodlands are predominated by Ash, but it is the Yew and coppiced Hazel that makes the woodlands locally special and important. Many such woodlands grow on top of extensive limestone pavements and these woodlands have developed a unique and almost mystical character.

Happy birthday National Trust! Thank you for all that you do to conserve and enhance @Arnside_AONB https://t.co/vbIDMPDbWh