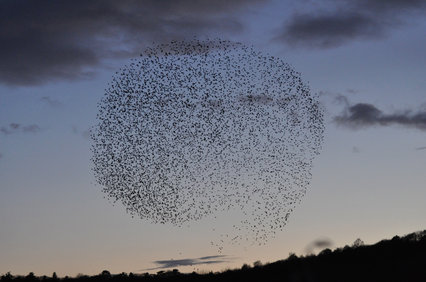 Visitors are set to be gathering to watch an amazing wildlife spectacle over the next few weeks at RSPB Leighton Moss nature reserve, near Silverdale. At this time of year the sky comes alive at dusk, as enormous flocks of starlings can be seen putting on a spectacular aerial display above the reedbed.

The birds fly in from all directions and turn the sky black, as they join together en-masse to settle down to roost for the night. If the conditions are right, they can be seen wheeling, turning and swooping in unison, appearing like a shoal of fish.

Annabel Rushton, Visitor Experience Manager at Leighton Moss, said: “Seeing the huge flocks of starlings dancing in the air is one of the UK’s top wildlife spectacles and it really is a jaw-dropping sight to behold. It’s a similar experience to watching fireworks, with visitors gasping with excitement when they see them twisting and turning, creating all sorts of amazing shapes and then applauding the finale where they pour into the reeds like treacle and chatter to each other before going to bed.”

Around 10,000 starlings have returned to Leighton Moss so far and numbers have been known to grow up to 100,000 some years. These ‘murmurations’ usually continue until Christmas, but in colder years have occured through to February and March.

Annabel added: “Don’t be fooled by the numbers of starlings you see in the winter though, as starlings are sadly declining in the UK. Although the starling is still one of the more common garden birds you see, the breeding population of starlings in the UK has crashed by over 70% and the RSPB is working with farmers and land owners to encourage land management that benefits starlings and other wildlife.”

To find out more about events and wildlife sightings at Leighton Moss, visit www.rspb.org.uk/leightonmoss for details.

Are you ready to BioBlitz? https://t.co/szWXvpG4yS