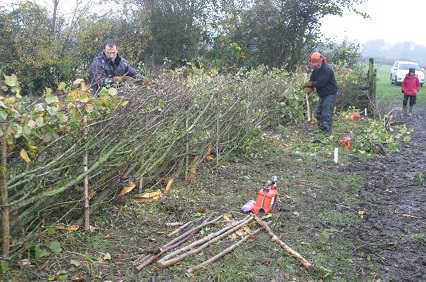 The AONB hosted the first of the winter’s grand-prix competitions of the Lancashire and Westmorland Hedge-laying Association on Saturday 31 October at Leighton House Farm in Slackhead. A total of 16 competitors took part on a rather damp and misty day, and laid over 100 metres of hedgerow in the traditional Westmorland style. It was particularly pleasing to have four teenagers competing in the Junior Class. Many thanks to Dallam Estate and tenant farmer Steven Gunn for hosting. Hedges are judged for being stock-proof, tidy and, most importantly, for their hedge re-growth qualities.

Tony Riden, Countryside Officer for Arnside & Silverdale AONB said: “Reviving, celebrating and getting local young people trained and confident in the traditional skills of a hedger are really important to preserve the living legacy and character of our hedgerows. Hedgerows are important wildlife refuges and wildlife corridors within farmland as well as providing traditional functional stock-proof boundaries.”

Thank you for staying at home and protecting our rural communities, protecting the NHS and saving lives. Please do… https://t.co/oxN2bcxYEx

A huge thank you to our local farmers for whom the work never stops. @NFU @AONBfamily @ArnsideVillage https://t.co/eCfTlG0rRo

A lovely sign of #Spring - this thriving hedge at Dobshall Wood was planted by #AONB volunteers and children from A… https://t.co/Van7VubVRK

The stunning Kent Estuary. Our wonderful landscape will still be here when we are through this difficult time. Plea… https://t.co/etBwEucPue