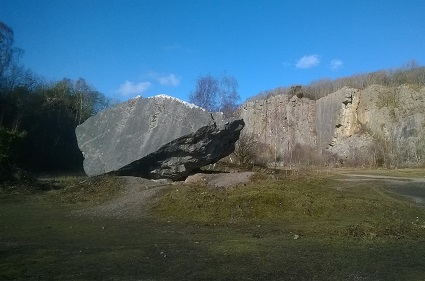 A team of geologists from both Lancaster and Liverpool Universities will be carrying out geological sampling at various locations in the AONB and wider Morecambe Bay area this autumn. The research is being supported by The Geological Society, the International Commission on Stratigraphy, Natural England and the AONB Partnership.

An essential part of this hypothesis relies on the strength and number of reversals of the field in the Carboniferous. There are currently only limited records of the field in the time before the Permian-Carboniferous reverse superchron which lasted from 318 to 262 million years ago. The United Kingdom has an excellent record of sediments that were deposited around this time, but the Lower Carboniferous was heated to high temperatures in most parts of the UK, leading to loss of the original magnetic signal. The Lower Carboniferous in Cumbria and North Lancashire has not reached such high temperatures, and thus is very promising for reconstruction of the magnetic field.

Sampling will be conducted in a team of 2-4 geologists using an approved methodology. Hand samples (roughly 10x10x10cm blocks) will be taken from the rock outcrops with a hammer and chisel. Once the broken surface weathers like the surrounding rock, it leaves no evidence of a sample being taken. No sampling will be undertaken at locations where important fossils, palaeosols or structures are present and no drill cores will be taken. Sampling at Trowbarrow Quarry SSSI has formal consent from Natural England.