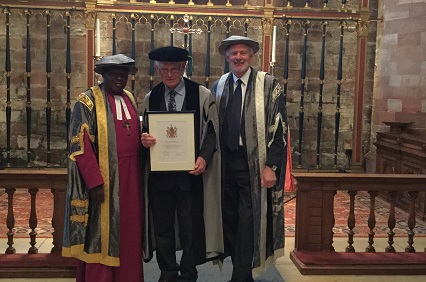 Retired RSPB warden John Wilson has received an Honorary Fellowship from the University of Cumbria in recognition of his ‘lifelong and outstanding contribution to nature conservation’.

The first warden of popular nature reserve RSPB Leighton Moss, John was presented with his award by the Chancellor of the University, the Archbishop of York Dr John Sentamu, at a ceremony at Carlisle Cathedral on November 27.

Since starting his career at the Silverdale reserve in May 1964, John has played a vital role in creating and maintaining the important reedbed at Leighton Moss, making it the best possible home for the rare and unusual wildlife that lives there, including bitterns, marsh harriers and otters. He has also carried out an incredible 40 year study into another of the reserve’s special birds – the bearded reedlings, which breed nowhere else in the north west.

John’s passion for wildlife hasn’t ended there either – following his retirement in 2000, John has continued as a key volunteer at Leighton Moss, surveying and recording wildlife, and continuing with his important bearded reedling study.

On receiving his award, John Wilson said: “Thank you so much for the Fellowship, it is indeed a great honour to have ones life’s work recognised by your local university.”

John also encouraged everyone present at the ceremony to “please make time in your busy lives to look at wildlife.”
He added: “In my experience you will find it enthralling and inspiring and breathtakingly beautiful.”