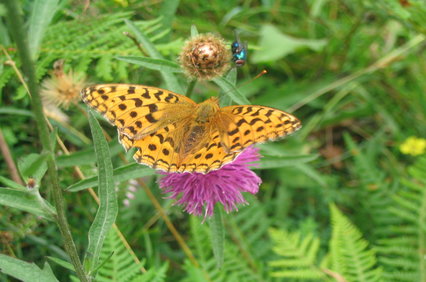 The future is looking brighter for a host of rare wildlife on Warton Crag nature reserve, thanks to the work of the RSPB with  support from the Lancashire Environmental Fund, Arnside & Silverdale Area of Outstanding Natural Beauty (AONB) Grants Fund and Morecambe Bay Partnership.

Restoration work will be carried out over three years to try to save two very rare species of butterfly – the high brown fritillary and pearl-bordered fritillary – from the brink of extinction.

Warton Crag was historically quite an open site with very little tree coverage. At its peak almost thirty years ago it was home to an incredible abundance of rare and specialised species but these have declined in number as the site has become more overgrown.

Many of the butterflies found there are now at risk of extinction not only at the site but across the whole of the UK. The RSPB developed a plan to restore the key habitats on the site and the initial stage of work has been completed.

Richard Smith, RSPB Estate Worker said: “The work began in February and is being carried out by local forestry contractors as well as a team of RSPB staff and volunteers. We obviously have a break in the work now that birds are breeding and will resume again later in October.”

Most of the work carried out over this three year project will be coppicing, a traditional woodland management practice where trees are cut down and allowed to re-grow. This benefits a range of wildlife but especially the rare and declining fritillary butterflies. As the trees re-grow these areas can be fantastic places for birds including a host of warblers that will migrate all the way from Africa to breed here.

Some permanent open areas will be created on or near the limestone pavement and crags. This is hoped to benefit specialist plants as well as the beautiful metallic green Cistus Forester moth, which occurs nowhere else in Lancashire.

Richard added: “The RSPB work in close collaboration with Lancashire Wildlife Trust and Arnside & Silverdale AONB to deliver the joined up management of Warton Crag. We are excited to see how the wildlife will respond in the coming years.”