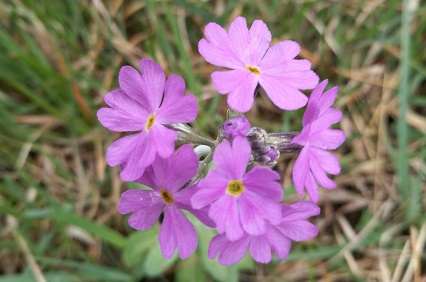 There have been lots of changes at Silverdale’s Hawes Water in recent months in relation to the habitats, views and access through the area. Over 200 tons of timber (mainly non-native beech and sycamore) have been felled and extracted through the Reserve with the timber going to a local woodfuel company to be processed for firewood. The timber extraction route through the pastures has been reprofiled and will be allowed to revegetate naturally. The felled/thinned areas of beech plantation and existing open habitat adjacent to the lake will shortly be grazed by a small number of native breed cattle from Morecambe Bay Grazing Company. This will help to prevent scrub encroachment and improve the condition of the grassland and fen habitats (two of the features for which the site was designated as a Site of Special Scientific Interest and a Special Area of Conservation).  Bird’s-eye Primrose has flowered in profusion at the lake edge this year and we hope to increase the abundance of some of the other marl grassland species such as Grass of Parnassus, Butterwort, Dark Red and Broad-leaved Helleborine and Fragrant Orchid that are just about holding on.

The new boardwalk and footpath are now completed and were officially opened in an impromptu ‘rope cutting’ ceremony by Andy Clements (Natural England Board Member and Chief Executive of the British Trust for Ornithology) when he visited on 30 July. The surfaced footpath now connects the end of the boardwalk to the gravel footpath leading from Moss Lane, providing a linking disabled access route between the two otherwise unconnected public rights of way. The oak memorial bench from the old boardwalk has been repositioned on the new boardwalk with the agreement of the family who donated it. We also have plans to install two new oak benches in more elevated positions along the surfaced path to allow visitors to sit and enjoy views of the lake. Vistas of the lake have also been restored from the Gait Barrows meadows from the east and the public right of way leading from Challan Hall to the north.

Looking ahead, it will be fascinating watching the habitats develop as the vegetation re-establishes, especially on the newly created marl (calcium carbonate) substrate adjacent to where the outflow of Little Hawes Water meets Hawes Water. Pine, beech and birch were felled in this area and the leaf-litter and beech mast layer removed to re-expose the marl. We expect this area to develop into a blue moor-grass dominated grassland with black bog-rush, juniper, bird’s-eye primrose and a variety of orchids aided by low intensity cattle grazing. We also plan to undertake some additional willow and alder coppicing along the lake edge and within the Little Hawes Water basin to continue to open up the views of the lake and manage the mosaic of fen/wet woodland. There are several mature beech and sycamore in the marl grassland that we plan to fell once we have surveyed again for roosting bats this autumn. In spring/summer 2019, a small concrete sluice will be installed in the Little Hawes Water outflow ditch, to re-instate the pre-drainage water levels in the Little Hawes Water basin and increase the extent of the open water and associated alkaline fen habitats around the small marl tarn next to Hawes Water. Natural England’s fantastic group of Hawes Water volunteers will be meeting monthly during the autumn and winter to help us to manage the rare limestone habitats here. They plan to cut back woody growth and brambles along White Scar limestone ridge to re-establish the limestone grassland habitat. Their commitment to the management of the rare habitats in this area over the last few years has been recognised by being shortlisted for a Natural England Volunteer National Award!

Natural England would like to thank the local community around Gait Barrows NNR for their patience and support during the restoration project. We appreciate that speed of change and the stark appearance of a newly restored site can be disconcerting and very unsettling, especially on a site as well loved and visited as Hawes Water. We believe that the disruption will be well worth it to help improve the amazing habitats, views and access found here. Hopefully in a season or two the felled areas will soften as the vegetation regrows and the lakeside will be just as beautiful and peaceful as it was before.