The walk starts from the car park at Heron Corn Mill. Please note this is a private car park, and parking for the day is £2.00. Please do not park in groups with multiple cars without first contacting the office on 015395 64271, as Heron Corn Mill runs a year round programme of events, and needs to use the space. There has been a corn mill on this site since medieval times. Today the mill is leased by a trust and is open to the public. A second mill across the river was converted to papermaking in the 18th century and paper has been made here ever since.

Follow the lane between the wall and the hedge from the corner of the car park and turn left at the road towards the village of Beetham. The village church is well worth a visit. There has been a church on this site since Norman times and the lower part of the tower dates from the 12th century.

Turn right past the Wheatsheaf Hotel, first left into Stanley Street and then take the footpath off to the right signposted to Hale, going behind the houses into the field beyond.

Follow the footpath diagonally across the field. The large granite boulder in the middle of the field was transported in the ice from the Shap fells during the Ice Age and deposited here. There are many similar boulders, known as erratics, throughout the area. Look out for the ruins of the fortified farmhouse at Beetham Hall which date from the 14th century and take a moment to admire the views across to Farleton Knott and Barbon Fell beyond. Continue along this path, through two squeeze stiles and in the corner of the next field take the track on your right leading into the wood. The wall on your right as you walk up the hill dates from medieval times and enclosed the Beetham Hall Deer Park.

Pass through the squeeze stile and carefully follow the waymarked route to Slackhead. There are lots of paths so it is important to keep your eyes open for the little arrows guiding you through the wood and across an area of limestone pavement. Take extra care on the limestone in wet conditions as it can become very slippy. The deep fissures or grykes in the rock were formed thousands of years ago as water dissolved the limestone. Today they provide moist and shaded conditions ideal for Hart’s Tongue and Polypody ferns and for the roots of trees such as Yew, Rowan, Ash and Hazel.

Carry on through the wood and on reaching the road, turn right towards Slackhead, passing a road on your left signposted to Silverdale and Arnside, and carrying straight on until you reach a narrow track on your left signposted to Fairy Steps. (You may take a short-cut here back to Beetham by continuing along the road) The footpath climbs quite steeply over Whinscar through the wood to Fairy Steps on the old Coffin Route. Until Victorian times the people of Arnside had no church of their own and they had to carry their dead along this path for burial in the churchyard at Beetham.

Go down the Fairy Steps or take the alternative permissive route round the cliff to the south rejoining the path at the bottom of the cliff.

Follow the path signposted to Beetham Fell. A hundred years ago this was open grassland, but since grazing stopped, the trees and shrubs have gradually colonised the area. Butterfly Conservation has recently carried out some management work to open up the grassland again, providing habitat for some of our rarest butterflies such as the Duke of Burgundy.

Where the footpaths cross by a cairn (a small mound of stones) take the track straight ahead and follow this through the woods to the road. Go over the stile and turn right onto Cockshot Lane and after 100yds take the footpath on the left into the woods, signposted to Storth. This footpath bends to the right and takes you over a stile and out onto the lane to Haverbrack. Turn left onto the lane, cross the road and through the squeeze stile into the field beyond. Walk down to the gate at the bottom of the field, cross the driveway and go through the gate into the Deer Park. Follow the footpath into the centre of the park from where the house at Dallam Tower may be seen. This privately owned house is a Grade 1 listed building, designed by Webster of Kendal in the early 19th century, built around an earlier 17th century building. 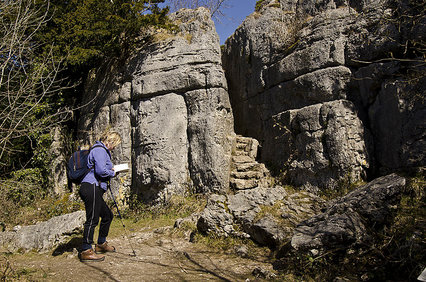 Retrace your steps to the cairn and follow the footpath to Beetham past the line of lime trees and up towards the trees on the top of the hill. The arcaded barn to your left was built in the 18th century to provide shelter for the deer herd. Take a moment to look back and savour the spectacular panoramic view of the Lakeland Fells. Cross over the haha, a characteristic feature of parkland which was designed to keep stock in or out without restricting the view of the countryside beyond, and go through the kissing gate. Continue down the hill through the avenue of trees to the squeeze stile and back to the car park to complete the walk.

A lovely photo from Mike and also a reminder to leave water out for birds and wildlife during the hot weather. https://t.co/LhdVGGyvBi

Did you take part in the big butterfly count? Although it’s finished for this year the @PoMScheme FIT count is stil… https://t.co/XT6wXKS8Bw

It’s Afternoon Tea Week - where is your favourite place to enjoy cake & a tea in the AONB? We have lots of great te… https://t.co/aWG0COFAB1

We had a fab time on the #CrossBayWalk today! https://t.co/7GO71spGOZ