The Wells of Silverdale 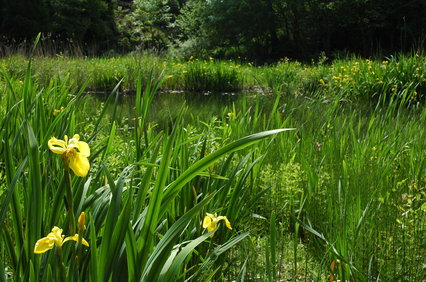 The wells and springs of Silverdale once supplied water for all the villagers and their livestock. They are no longer used, the water in the wells being impure and unsuitable for drinking or bathing, but they are reminders of a past way of life.

At Woodwell, water drips from the roof of a small recess in the base of the cliff and is collected in a small trough from which it flows into a large basin, originally used for watering cattle.

Burton Well supplied water to the people of Silverdale Green for many years until the roofs of the houses were fitted with gutters and downspouts and the rainwater collected and stored in tanks. The well was then only used to water stock and in times of drought, when supplies were delivered to the houses in water carts.

Water flowing from Bank Well has formed a pond, now restored to its former glory and rich with wildlife.

Dogslack Well supplied water to The Row cottages, finally going out of use in 1938 when the aquaduct from Haweswater to Manchester was constructed and water was piped from this supply to the village.