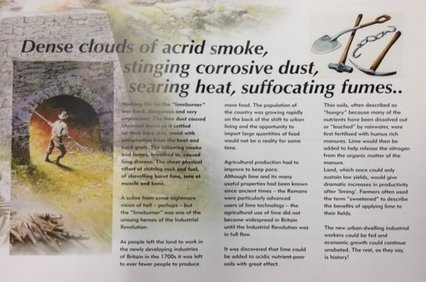 There are a number of features in the landscape which link to past industrial activity, particularly associated with quarrying activities. Carboniferous limestone has long been quarried to provide building stone for the construction of cottages and farmsteads, and for agricultural walling.

Locally quarried limestone was also used for mortar, lime-wash and as a soil conditioner after firing in lime kilns. There are 36 known lime kiln sites in the AONB, most of which are substantial limestone-built structures and form significant landscape and industrial heritage features.

These probably fell into disrepair through lack of maintenance when it became cheaper to buy mass-produced lime products, but several of the most notable or accessible kilns were restored or consolidated during the Limestone Heritage Project between 2001 and 2007.

Read our latest June newsletter to find out what’s going on in the @Arnside_AONB and keep up to date with news from… https://t.co/ExLzxpiWQy

Lots of little mouths still to be fed. https://t.co/3pX0BnGPRD

We are celebrating volunteering all this week in tribute to all our hard working volunteers in the @Arnside_AONB he… https://t.co/50mh0qs2kA

Our volunteers carry out a variety of tasks in the @Arnside_AONB including maintenance of Rights of Way fingerposts… https://t.co/MKvlqZgdAk