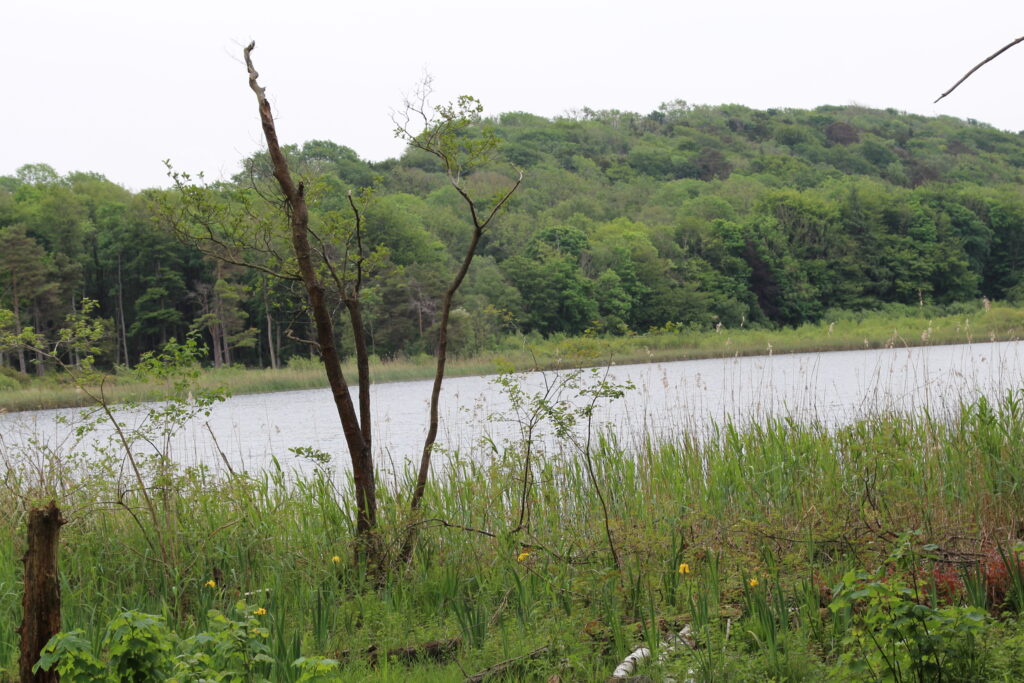 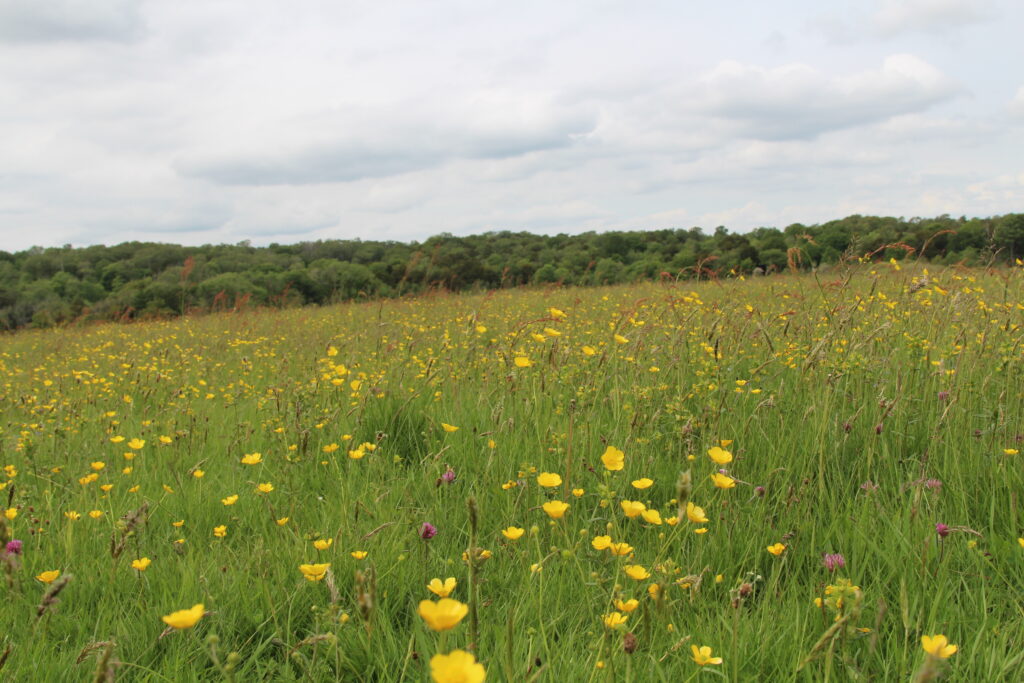 Lying at the heart of the AONB, Gait Barrows National Nature Reserve is one of Britain’s most important limestone landscapes made up of a diverse mosaic of limestone and peatland habitats. The NNR contains an intricate mosaic of limestone habitats that are home to a rich variety of exciting and often rare wildlife. From open rock pavements to damp fen; from deep yew forest to the tranquillity of Hawes Water, there is much to see on a visit to Gait Barrows.

Gait Barrows was dedicated as a National Nature Reserve in 1977 with the addition of Thrang Wood in 1999, Hawes Water in 2002 and Hawes Water Moss in 2005. The reserve is now 122ha in total.

Wherever possible, it is Natural England’s ambition to restore the natural processes supporting the habitats, creating a rich and diverse ecosystem where habitats blend naturally into one another, providing niches and structure for a broad range of species.

There are a number of public footpaths and three way-marked nature trails on site. 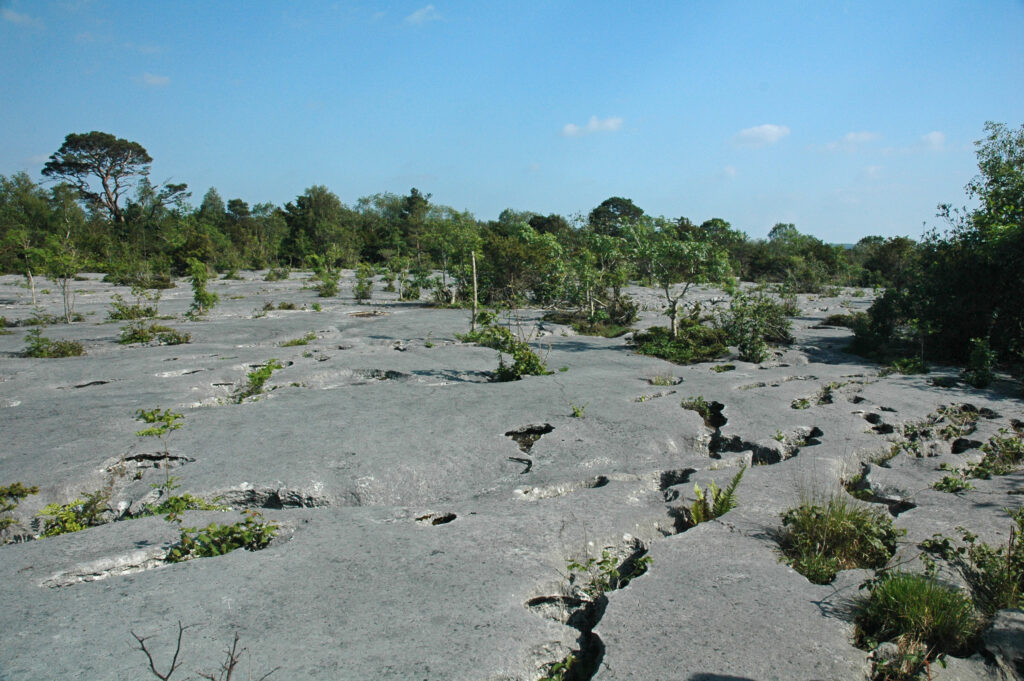 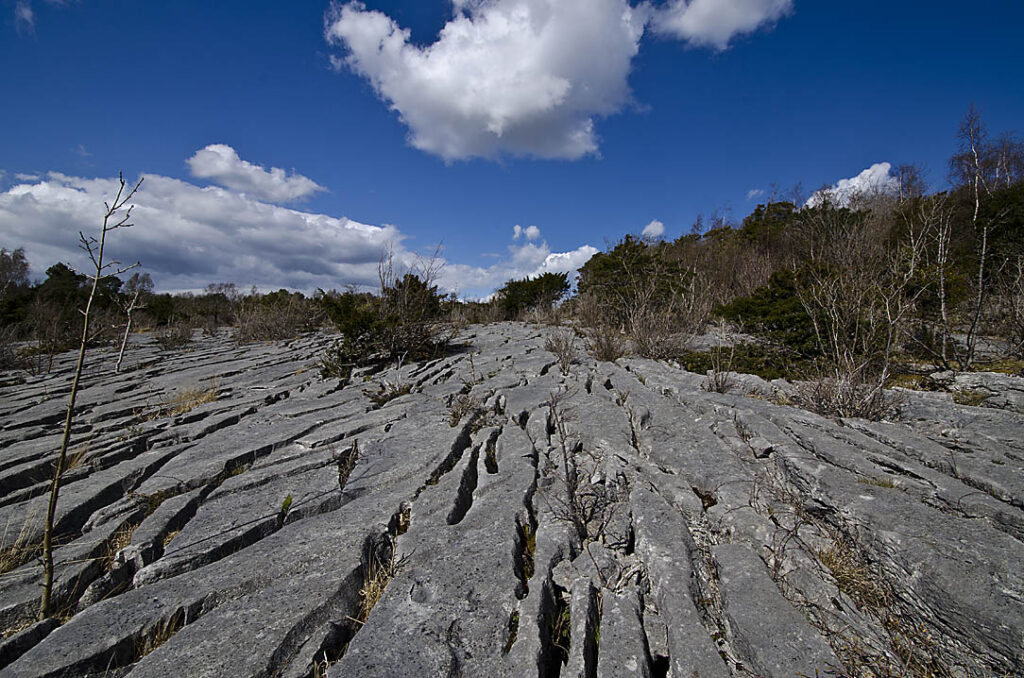 Wheelchair accessibility: The Public Right of Way from Challan Hall and Moss Lane to Hawes Water is accessible for wheelchair users – although the hoggin path can develop channels following bad weather and some gates can be tricky. There is a layby near the entrance to this route near Challan Hall. Other Public Rights of Way are accessible by all-terrain mobility scooters. There is an additional car park accessed by a Radar key on Moss Lane.

Terrain & incline: Variable. Some sections have rocky surfaces and mild to moderate inclines, but there are many well maintained and level hoggin paths. There are also paths through meadows where the ground surface is generally even with some boardwalks.

Benches: There are some benches near Hawes Water and on the main Public Right of Way.

Dogs: Dogs are permitted on the Public Right of Way, but please keep dogs under control. Dogs are not permitted on any other parts of the reserve to prevent disturbance to wildlife

Cattle and ponies graze parts of the site during autumn and winter. Signs will alert visitors to the fact that they are entering a grazing compartment.

Bikes: There is one short bridleway from Challan Hall to Challan Hall Allotments (avoiding a section of Brackenthwaite Rd). Bike are not permitted on the rest of the reserve.

Horses: There is one short bridleway/permissive bridleway from Challan Hall to Challan Hall Allotments (avoiding a section of Brackenthwaite Rd). Horse riding not permitted on the rest of the reserve.

Swimming / Fishing / Boating: Swimming, fishing and boating on Hawes Water are not permitted to protect wildlife.

Picnicking: Picnics are welcome, but please don’t have BBQs as this can be a fire risk and damage habitat.

There aren’t any bins, so remember to take a bag for litter, and take your rubbish home please.

Toilets at Leighton Moss & The Blossom Bird Cafe in Silverdale, and The Wayside Café in Arnside (all customers only)

Nearest Cafe: Leighton Moss Cafe & The Blossom Bird in Silverdale, and The Wayside Café in Arnside.

Parking: There is a small car park at the reserve. Natural England request that visitors consider making a contribution towards reserve management by using the RingGo app (details available in the car park). There are also laybys on the road near Challan Hall and a disabled access car park on Moss Lane (radar key required).

Please note a permit is no longer required to visit Gait Barrows.

Before you visit: Make sure you’re familiar with the updated Countryside Code, so that you can stay safe and help us look after this beautiful landscape. 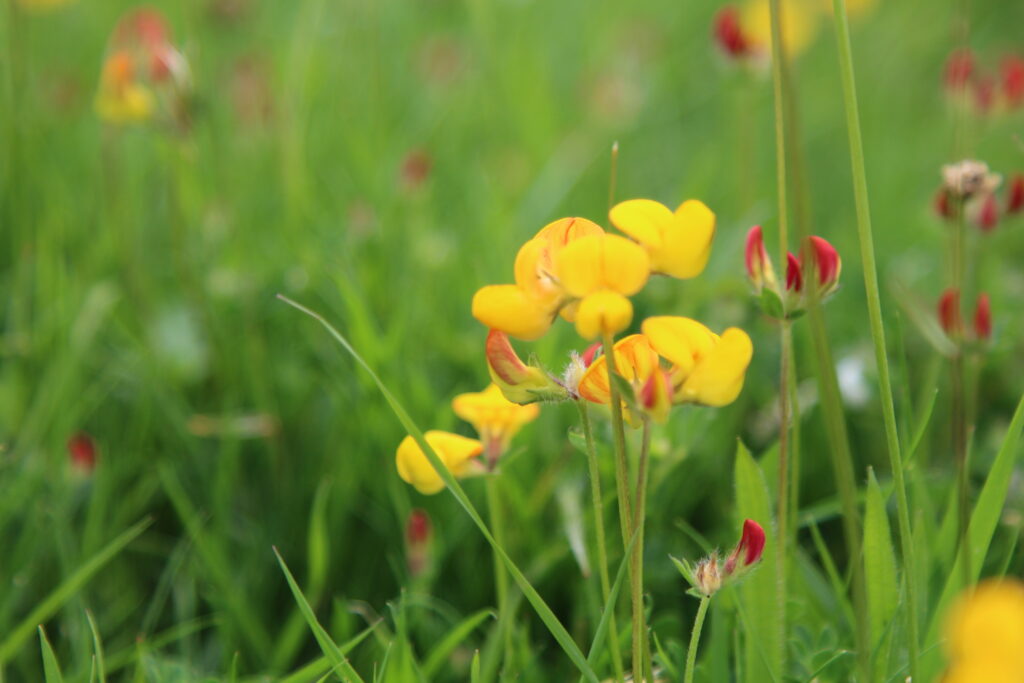 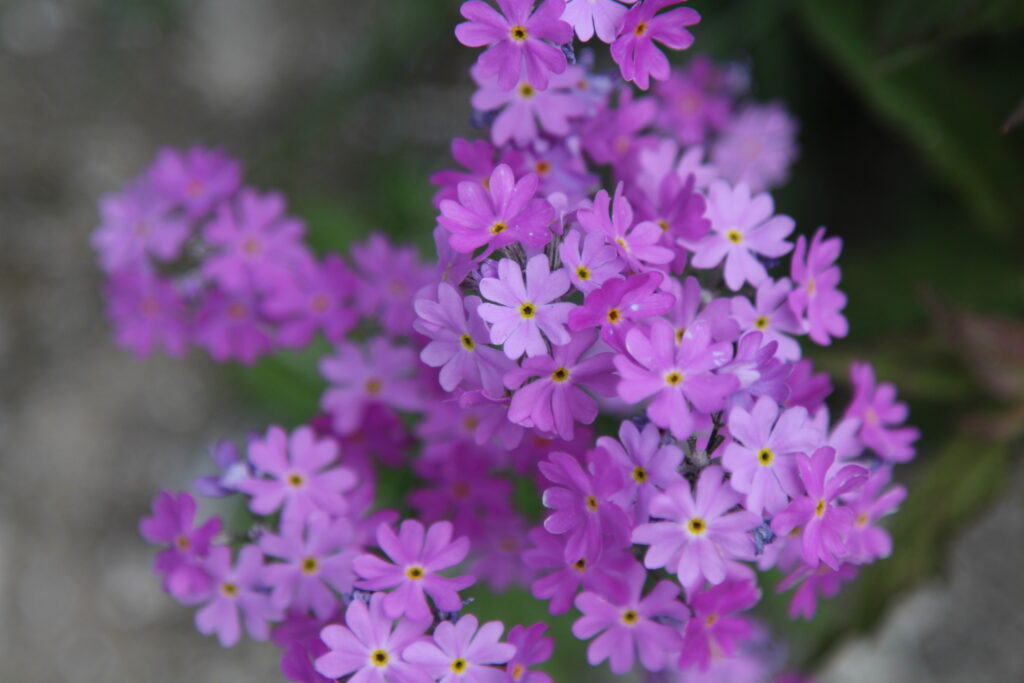 Gait Barrows is a site for all seasons…

In early spring, take a stroll along the Limestone Trail to look for the first flowers of stinking hellebore and hear the spring songs of returning migrant birds like chiffchaff and willow warbler. On a sunny spring morning you should see freshly emerged brimstone butterflies and the first flush of primroses. Around Hawes Water listen for the croaking of frogs at the lake edge, and the buzz of bumblebees as they gather pollen from the willows by Hawes Water. Later in spring, butterflies like Duke of Burgundy and pearl-bordered fritillary may be seen in the small sunny glades of the woodlands.

As spring slips into summer, look out for the male marsh harrier as he sky-dances over his territory around Hawes Water in the skies above the pavements. Early summer sees the rich wildlife of Gait Barrows in its full splendour. Enjoy the richness of the butterfly life, and look for the spectacular but rare high brown fritillary which continues to thrive at Gait Barrows. Revel in the rich variety of flowers of the limestone pavements such as angular Solomon’s-seal and dark-red helleborine.

In autumn, walk the Yew Trail and enjoy the deep colours of the low afternoon sunshine on the trunks of yew trees. Enjoy the wildlife spectacular of the thousands of redwings and fieldfares which arrive in October to feast on the yew berry crop. In early autumn sunshine, the last of the brown hawker and migrant hawker dragonflies can be seen hunting for late-flying insects, while speckled wood butterflies can often still be seen in early November. A walk on the boardwalk by Hawes Water may be rewarded with views of the autumn-flowering grass-of Parnassus. As the nights draw in, the peace of an evening stroll may be disturbed by the eerie barking of roe deer.

Wildlife can still be found even in deepest winter, with birds like hawfinch and bullfinch likely to be seen perched in the treetops. After snow, look for the signs of animals like rabbit, stoat, roe deer and fallow deer. Badgers will still venture out in the depths of a winter night, but all you will see is the distinctive five-toed paw mark in mud or snow. As late winter turns again to early spring, a walk around Hawes Water may reward you with sightings of goldeneye and tufted ducks, and you may be lucky enough to see the strange courtship ‘penguin dance’ of the great crested grebes on the lake.

A landscape moulded by time…

The landscape at Gait Barrows has been shaped over many thousands of years. Much of the nature reserve lies on ancient Carboniferous limestone which was laid down in warm tropical seas some 300 million years ago. With the influence of more recent mountain building periods that created mountain ranges like the Alps, this bedrock has been flexed and uplifted to give the low hills and crags of the limestone landscape that we are familiar with today.

In the last Ice Age some 14,000 years ago, deep ice covered this part of Northern England and Hawes Water Basin was formed by the deeply scouring ice sheet as it passed from what today are the Cumbrian high fells to the Irish Sea. This deep trough in the limestone was then filled with groundwater to create the Hawes Water we know today. The intricate features of the limestone pavements have been shaped and modified by glacial action in the last Ice Age, and more recently by rainfall and groundwater.

On the open pavements you will see wide flat blocks called clints, separated by deep fissures known as grikes. Lying on the clint surfaces are shallow gutter-like runnels and pan-like solution cups, which collect and funnel rainwater from the rock surface. This ancient landscape is still home to many rare species of plant and animal, many of which can be found nowhere else in England. These include the tiny narrow-mouthed whorl snail and the very rare moss Scorpidium turgiscens.

Gait Barrows is a National Nature Reserve, and is managed by Natural England.

Working with the AONB team 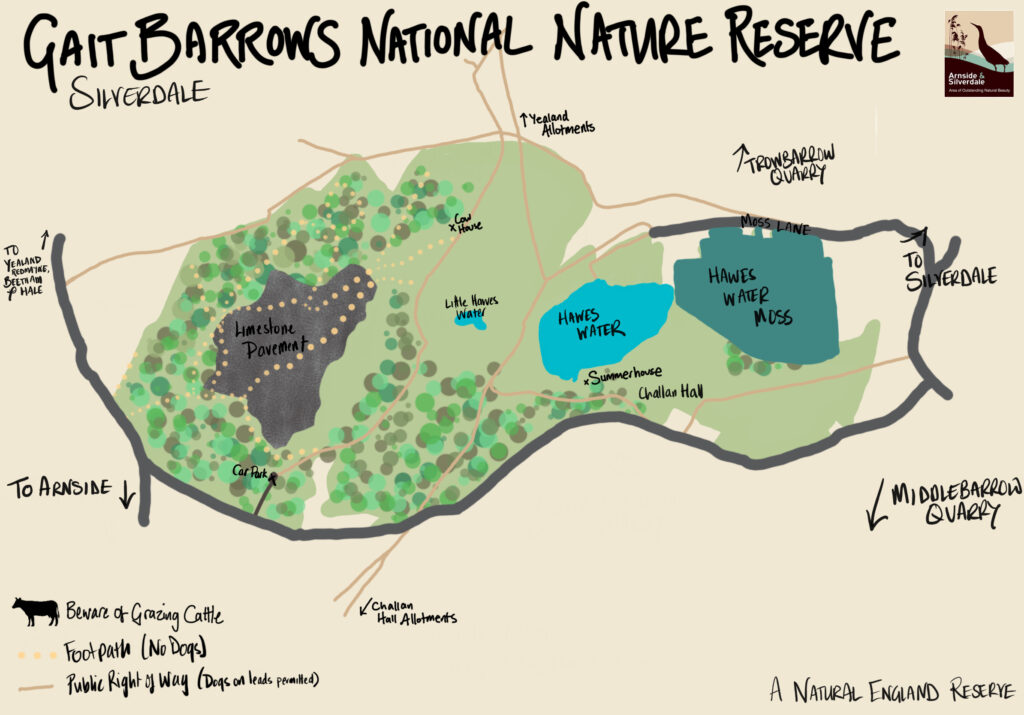