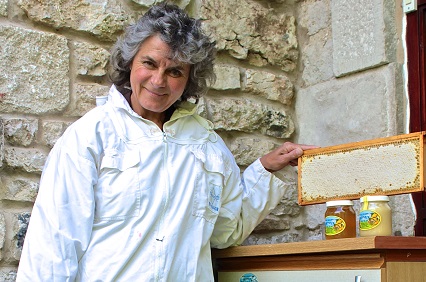 Between Woodwell and Heald Brow, amongst centuries old woodland, is Hazelwood Hall and the Lodge, where you can buy delicious local honey from the apiary of Roger and Nathalia Walton.

Roger and Nathalia arrived at Hazelwood Lodge in 1986, and worked to restore the stunning walled garden, originally built around the turn of the 20th century. The garden was designed to provide perfect conditions for various crops to grow. The North and West walls are lined with limestone, for plants that grow best in cooler environments; while the South and East are brick lined for warmth, and are used to grow plants which prefer warmer temperatures. The garden now hosts apple, peach, plum and pear trees, rhubarb, raspberries, strawberries, gooseberries, blackcurrants and redcurrants, and vegetable plants; and nearby are their bee hives – home to thousands of honey bees!

The honey bees are traditional British bees – black bees, and are well suited to the climate of Silverdale, doing the bulk of their work in the morning. Worker bees live for about six weeks, with winter bees living six months inside the hive. The queen bee can live for four years or more.

As well as the beautiful walled garden, Roger and Nathalia have a flower garden, supplying a rich source of nectar for the bees, and an arboretum of North American trees and shrubs which were imported and planted shortly after the continent was discovered.

The Waltons use beeswax to make polish and candles. They also use the fruit they grow to make numerous different types of jam, and have a five star food preparation hygiene rating.

Walton’s honey and jams are sold directly from their home in Silverdale.