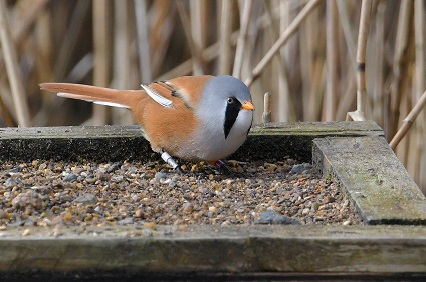 Autumn is a wonderful time for wildlife, and there is no better time for visitors to RSPB Leighton Moss in Silverdale, to enjoy the curious seasonal behaviours of two special residents at the reserve – bearded tits, and red deer.

From now until the end of November, visitors have the greatest chance of observing bearded tits, colourful little birds specially adapted to living in reedbeds. When the insects they feast on the rest of the year become scarce in autumn and winter, bearded tits switch their diet to reed seeds. They don’t have teeth to chew it up, so they swallow grit – known as ‘gritting’ – to help them digest it. Leighton Moss’ wardens have placed special grit trays besides the reserve paths for them. It also allows their populations to be monitored closely and presents opportune locations for visitors to view these generally secretive birds. They are most visible on autumn mornings when conditions are right – dry, still, ideally with sunshine.

Richard Miller, Warden at Leighton Moss, said: “We manage the reedbed at Leighton Moss for a host of important species, but bearded tits have always remained one of our priorities. Due to development and drainage for farming, reedbeds are a rare habitat in the UK, so those we have left, and the bearded tits within them, are important to conserve. Leighton Moss is one of the best places to see bearded tits in the country. Now is the perfect time to visit and witness these charming birds on the trays.”

Early mornings and late afternoons in autumn are also an ideal time for visitors to Leighton Moss to witness red deer, Britain’s largest land mammal. Though they are present throughout the year, it is during this period when the stately forms of red deer stags emerge from the reedbed to engage in the annual ‘rut’, or breeding season. In competition for the attentions of females, called hinds, the stags let out thunderous bellows to advertise their fitness and supremacy. When stags meet, they size one another up by strutting and posturing in parallel, and if two equally-matched individuals refuse to back down, antlers lock and combat commences.

Richard Miller went on to say: “Red deer hold an enduring appeal at Leighton Moss, and the annual rut proves to be a reliably exciting time for visitors. Those lucky and patient enough are likely to be rewarded with sights and sounds of their exceptional behaviour.”

For more information on incredible autumn wildlife you can find on the reserve, and the enticing events being held over the season, visit www.rspb.org.uk/leightonmoss